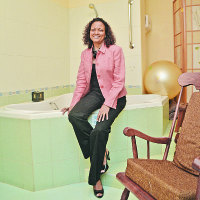 Our core values and passions manifest in a thousand little ways. Debrah Lewis’ lifelong commitment to the practice of midwifery was foretold when as a child she tagged along with her mother, a Red Cross volunteer, to hospitals in Antigua. It never occurred to her to become a doctor.

“I decided I wanted to do nursing” the soft-spoken Lewis remembers. “The nurses were the ones I saw spending time with the patients. I wanted to be there to provide some sort of comfort.”

At nursing school her teachers quickly realised that she particularly loved the maternity department, caring for mothers and ushering in new life.

This preoccupation with life and the beauty of new beginnings even manifests in her off time. After almost a quarter century of living in Trinidad, her favourite pastime is going to Grande Riviere to see the leatherbacks lovingly lay their eggs or witness the babies scampering to sea.

“I go several times a year and I’m still blown away,” she says.

That abiding preoccupation has driven her to team with other like-minded women to raise the profile of midwifery in Trinidad and Tobago and the Caribbean. In a region where childbirth is associated with a laundry-list of unbending, almost militaristic rules, Lewis has strived through her work with the local Midwives Association, the International Midwives Association and the Mamatoto Resource and Birth Centre, to offer women a comprehensive range of options, education and care.

For this she was awarded the Chaconia Medal Gold at the Independence Day awards in August. Lewis is resolute that the recognition for the development of women should be more specifically seen as a salute to the value and contribution of midwifery to maternal health and family life.

“We had a birth this morning and it still touches me after doing it for so long,” Lewis recalls from the colourful Mamatoto waiting room in Belmont. “Each one is so special and different. It has never happened before and will never happen again. Most times it’s such a joyous occasion, something you celebrate. That’s why I’ve chosen this path as opposed to a more medical type of setting. “I feel like as women we have lost so much of our strength. We used to be surrounded in our communities by women breastfeeding and caring for babies. Now we have people having babies who have not been exposed to babies before. We really do need to have a re-education of women… to tell them that they can do it on their own, they can do it without drugs. Pregnancy is not an illness or a disease.”

For Lewis, midwifery isn’t just about combatting the terrible clichés about childbirth that have ballooned over the years—the growling woman, the snippety nurse, the absent father, the insults to teen mothers. Neither is it about offering a select few the opportunity to customise their birth experience with everything from water births to birthing balls, scented candles to music.

Lewis insists that the work is an entry point to address a range of social issues including domestic violence, poverty and mental health. The sliding scale pricing mechanism Mamatoto uses to serve its clients means that everyone from the unemployed mother to the power professional, has an opportunity to address their fears, be armed with information and prepare for the beauty and challenge of welcoming new life. Inclusion, choice and empowerment are the central tenets of the organisation.

One pressing issue for midwives is that of sex education for young people. The local Midwife Association has reached beyond its expected mandate, going to schools to give information and answer questions about biology, sex and safety. The journey toward taking ownership and responsibility for your health and well-being begins during these years. Yet Lewis often finds teachers reluctant to broach the subjects, even instructing the midwives not to answer particular questions.

“A lot of the challenges come from ignorance in the sense of not being aware. We still have adolescents who don’t know that as a woman you urinate from here, have a baby from here and have a bowel movement from here. That awareness of our bodies and how it functions is missing for so many. And then we have adult women who come here, have had babies before and don’t know what it entails. Nobody took the time to talk to them and explain to them,” Lewis lamented.

A true Caribbean woman, Lewis was born in Guyana, grew up in Antigua and Barbuda and has lived in Trinidad for 23 years. She has worked to raise the profile of the region at the International Confederation of Midwives based in The Hague. Lewis served on the board for two terms and had a three year run as vice president. It was a deliberate attempt to bring the Caribbean to the table.

She credits the incredible team of midwives and doulas at Mamatoto for their commitment to a shared vision of empowering women and families. Together they’ve learned how to run their operation with business savvy but NGO heart.

The new national award winner is married to Dereck Lewis of Islandpeople fame (“the one with the locks,” she clarifies with a laugh). The two met at university in New York.

“We are both very passionate and very supportive of each other. You know when he’s doing an event it’s like somebody having a baby. There’s the same kind of investment, the preparation. We work in completely different industries but we support each other and are connected by that passion,” she said.