Debrah Lewis started noticing the gap between private and public health care in Trinidad and Tobago whenever she had to transfer a labouring mother to the hospital. The first thing that struck her was the look of anguish on the faces of the parents-to-be. “We have a concern about the condition of your baby,” she would gently explain. Barely had the word “hospital” come out of her mouth than the mother would whimper, “But I’ll be all alone!” and the father would add, “And I won’t be able to be there for the birth!”

Lewis, a midwife for thirty years, and a staunch advocate for parents and families, found the situation heartbreaking. In Trinidad and Tobago – as in many other Caribbean territories – fathers are routinely denied the right to witness the birth of their children. Lewis, largely through theTrinidad and Tobago Association of Midwives, has been lobbying for years to get the situation changed.

While changes have been coming, progress is slow and often random. The San Fernando General Hospital (the main health facility in the southern part of the island), still refuses to allow fathers into the delivery room. At the Sangre Grande hospital, which serves east Trinidad, fathers must sign a form agreeing to abide by certain regulations. In Port of Spain, the country’s capital, the hospital has too many conditions to count and even if you satisfy all the requirements, including attending birth classes, there is no guarantee. Being allowed into the delivery room is often up to the whim and fancy of the medical staff, who often come up with excuses not to include the father. “We’re too busy.” “We don’t have time to deal with that.” “It’s a ward situation.” “It’s our decision.”

Lewis is arguing that it’s not. One father actually called her crying in the middle of the night, begging her to intervene. He had jumped through all the hoops to ensure that he would be there when his child was born; when the time came, staff denied him access. Despite her contacts, Lewis couldn’t change their minds. She finds the stance of the public health system towards this issue hypocritical. “This child is never going to be born again,” she explains. “But then people will turn around and complain that our society is deteriorating; that fathers do not maintain an active presence in the lives of their children. Yet, when that child first comes into this world, the fathers are not allowed to be there.” 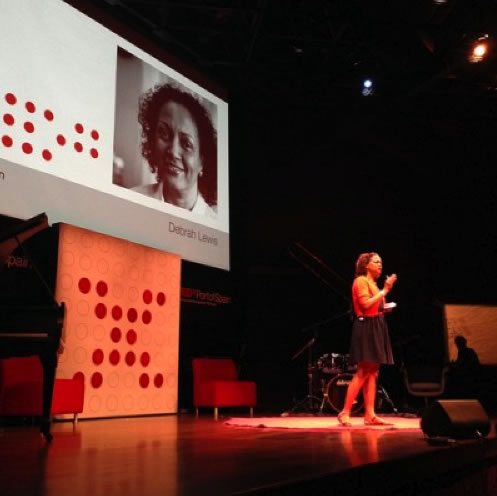 As the Executive Director of the Mamatoto Resource & Birth Centre, a community-based childbirth centre founded in 2004 to help address the demand for family-centered pregnancy care, the contradiction must seem especially bizarre to Lewis. “I don’t think most people realise that the discrepancy between public and private care is so wide,” she says. “They don’t understand the large number of fathers who are not afforded the opportunity to see their child being born.”

At the end of November last year, Lewis gave a talk at TEDxPortofSpain. The theme was “Connecting” and many in the audience expected her to talk about the maternal connection. Instead, Lewis stood up for women by furthering the cause of the men in their lives. “I’m a feminist,” she says, “but feminism has often given men the short end of the stick. They get blamed for things we don’t allow them to do. Men may have issues, but we’re part of the problem. The middle of the spectrum is where we need to be, but we’re at the other end.”